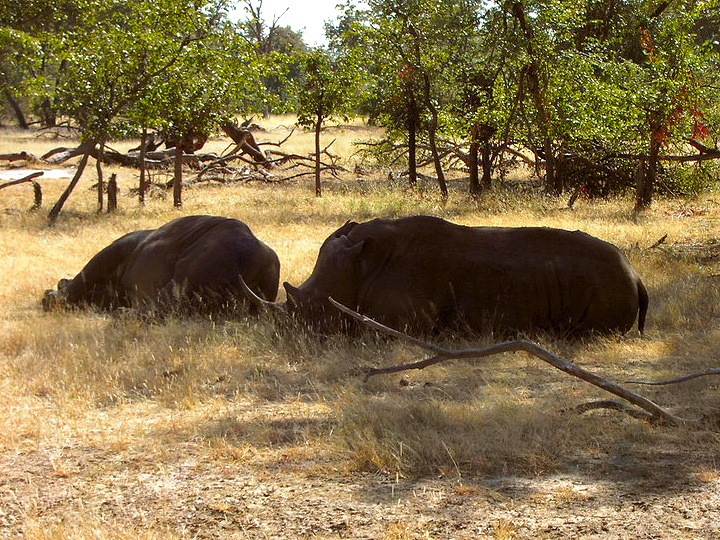 Mosi-oa-Tunya National Park is an UNESCO World Heritage site that is home to one half of the Mosi-oa-Tunya — ‘The Smoke Which Thunders’ — known worldwide as Victoria Falls on the Zambezi River. The river forms the border between Zambia and Zimbabwe, so the falls are shared by the two countries, and the park is ‘twin’ to the Victoria Falls National Park on the Zimbabwean side.

‘Mosi-oa-Tunya’ comes from the Kololo or Lozi language and the name is now used throughout Zambia, and in parts of Zimbabwe.

Mosi-oa-Tunya National Park covers 66 km2 (25 sq mi) from the Songwe Gorge below the falls in a north-west arc along about 20 km of the Zambian river bank. It froms the south-western boundary of the city of Livingstone and has two main sections, each with separate entrances: a wildlife park at its north-western end, and the land adjacent to the immense and awe-inspiring Victoria Falls, which in the rainy season is the world’s largest curtain of falling water. It extends downstream from the falls and to the south-east along the Batoka Gorges.

The wildlife park includes tall riverine forest with palm trees, miombo woodland and grassland with plenty of birds, and animals including giraffe, zebra, warthog, sable, eland, buffalo, impala and other antelope. Animal numbers fell in droughts over the last two decades. The park contained two white rhino which are not indigenous and were imported from South Africa – they were both poached during the night of June 6, 2007. One was shot dead and dehorned not far from the gate and the other received serious bullet wounds but has triumphed against all odds and still lives in the park under twenty four hours surveillance. As of June, 2009 the number of white Rhino in the park has been increased to five animals with plans to introduce further animals in due course. The indigenous (black rhino) was believed extinct in Zambia but has recently been reintroduced in a pilot area). Elephants are sometimes seen in the park when they cross the river in the dry season from the Zimbabwean side. Hippopotamus and crocodile can be seen from the river bank. Vervet monkeys and baboons are common as they are in the rest of the national park outside the wildlife section. As of January 2009 the commercial wildlife company, Lion Encounter, has been operating a “walking with Lions” experience within the park, with further plans to start a breeding programme for lions within the soon to be expanded Dambwa Forest section of the park. Within the wildlife park is the Old Drift cemetery where the first European settlers were buried. They made camp by the river, but kept succumbing to a strange and fatal illness. They blamed the yellow/green-barked ‘Fever Trees’ for this incurable malady, while all the time it was the malarial mosquito causing their demise. Before long the community moved to higher ground and the town of Livingstone emerged.

The Falls section of the national park includes the rainforest on the cliff opposite the Eastern Cataract which is sustained by spray from the falls. It contains plants rare for the area such as pod mahogany, ebony, ivory palm, wild date palm and a number of creepers and lianas. Small antelopes and warthogs inhabit this area, and may also be seen in on the paths through the riverine forest leading to the falls.

In November 2005 a new statue of explorer David Livingstone was erected in the park (the original and more famous Livingstone statue is on the Zimbabwean side). A plaque was also unveiled on Livingstone Island to mark the spot from where Livingstone was the first European to see the falls.

In the area directly before the river plunges over Victoria Falls, there is a small undeveloped stretch of the park which is currently the only riverfront location that can be accessed without paying a fee. It is a crucial location for elephants to cross the river.

The tops of the deep gorges below the falls can be reached by road and walking tracks through the park and are good places to see klipspringers, clawless otters and 35 species of raptors such as the Taita Falcon, Black Eagle, Peregrine Falcon and Augur Buzzard, which all breed there.